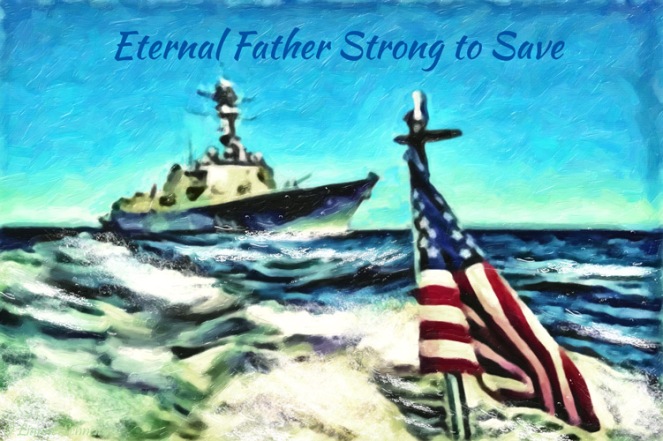 Eternal Father Strong to Save

I watched a young man on the news last night, in Normandy with his great grandfather, overlooking the wide open beach and the impossibly rugged, tall cliffs of the Normandy coast, saying honestly, “I can’t imagine putting my life on the line to cross that beach under heavy fire…I don’t think many of us can.” And yet, if we can’t imagine it, how are we to remember it and to honor the courage and the sacrifice of the thousands who gave their lives for our freedom? I remember as a teenager watching in awe and respect as the Cornelius Ryan book, The Longest Day, came to life on the “big screen.”

The complexity of the operation, the sheer logistical nightmare that it was, the impossible odds of making it across the beach or up those cliffs was almost overwhelming. In 1998, I was overcome by emotion and watched the first half hour of Saving Private Ryan with my hands covering my eyes and tears running down my face, as the reality of D-Day, raw and far too real, pounded my senses so that I could almost smell the fear, and the blood, of those who were part of the D-Day invasion. Over 40% of those who disembarked on the beach on June 6, 1944, died under the never ending hail of fire that peppered the beach or picked off individual men as they struggled up over the cliffs. I sat enthralled and so awed through the 10 hours of Band of Brothers which Tom Hanks and Stephen Spielburg produced after Hanks had starred in Saving Private Ryan.

Seventy years after that day, I can stand in freedom and put my hand over my heart to salute a flag stained by the blood of heroes…and pray that the world, which has too often forgotten the lessons of war, might remember this sacrifice too and work for the peace so hard won, in good part because of those who died in Normandy 70 years ago.

You can see my full portfolio at http://lianne-schneider.artistwebsites.com

Emptiness with wall and cloud

BRAVE new world…and a bionic one

A Ronka Poetry Practice Since 2014

Off Center & Not Even

The World Through Your Eyes

The Visual Chronicle
making it up as i go

amy begun saab ~life as i see it. a Vermonter deeply entrenched in Alabama dirt...so i plant flowers.

Trying to live a creative life